It just goes to show how much I actually used my RSS feeds in Apple Mail. Only today did I realise they were gone. Previously they would show up in my searches within Mail and in Spotlight. Today I realise they were not. I am sure most other Mountain Lion users have already figured out RSS was dropped by Apple, and you’ve already found a solution. But for those folk who are slow to catch on (like me) or who simply haven’t updated to Mountain Lion until recently, here’s how to recover you feed links.

2. Copy and paste into Terminal the following two commands. Hit Enter after each one:

You should now see your feed links listed in Terminal.  You should be able to copy and paste this into the news reader you’ve decided to use in place of Apple Mail.

The above steps will only give you a list of the feed links. If you want all your accumulated feed data from the past (all the messages) read below on how to recover that. It’s another process entirely.

The other option is to use a free RSS exporter tool available on Achingbrain.net. Download it from there, install, and run.

How to recover the previous RSS data (.emlx files)

The above steps only recovers the RSS feed links from Mail. If you like to keep an archive of incoming RSS feeds, you’ll need to take some more steps.

Exactly how you make use of the recovered data is another question, and will depend on what applications you have on hand. I now use DevonThink to manage my RSS feeds as that’s where I gather all my other research information so it makes sense to me to have my RSS feeds in there. It save having yet another program running each day, and yet another store of potentially useful information. DevonThink has a build-in RSS feed system, and it allows me to easily import all my past RSS feed data directly from Mail, after I have recovered the feed files into Mail. There are numerous other applications that can import and store Mail (.emlx) files. The instructions below are generic up until the point where I import the data into DevonThink. At that stage you’ll need to import it it your preferred storage location. Alternatively, you may be just find keeping the data stored in a local Mail folder, in which case you can stop at that step.

Hopefully you’ll only need to do Plan A. Plan B is only need if for any reason you can’t import your lost RSS messages directly into Mail.

In Mail, select on one of the mailboxes in the On My Mac section of the left sidebar. It doesn’t matter which folder, because Mail will create a new folder anyway.

Leave Import Mail From: Mail Data select, as it is. Click the Continue button.

Actually it’ll be in one or more sub-folders, but that’s the starting point. It is likely you can’t access that folder in Finder. It might be hidden (another feature Apple introduced to help make our life easier). If you get there using the Go to folder shortcut it won’t matter if it is hidden or not. But for the sake of convenience in Finder select View >> Show Hidden Files (and/or Show System Files).

Hit SHIFT-COMMAND-G and paste in the above folder address. You’ll now be looking at your RSS message folders.

So back to the mailbox import process. Mail will ask you to locate your mailbox. Just hit SHIFT-COMMAND-G and paste in the above folder path (~/Library/Mail/V2/RSS/)

Select the RSS feed you wish to import. Hit the Import button and the messages will end up in a new Import-(#) folder under On My Mac. The # will be a number, starting from 1. Each new import will increase the number.

You can now do what you like with these messages. Either leave them in Mail or export/import them into some other application you wish to organise them in.

If for any reason you can’t import your messages directly into Mail, here is a way to recover them manually. Most people should not need to do this.

The  first step is to get ready for placing the recovered RSS messages back into Mail. Either to leave them there, or to make them importable into another application of your choice.

In Mail create a new mailbox in the On My Mac section. Go to Mailbox >> New Mailbox…

You will then see the following drop-down window:

I put an @ sign in front of the name just to make it easier to find. I have quite a few mailboxes, and this makes it sort to the top of the list in Mail and in Finder.

You’ll end up with this in the left sidebar:

It seems Mail (at least the version I have, which is 6.1 build 1498) does not actually create this new mailbox as a folder on the hard drive until it has at least one message in it. So simply drag one message into the newly created mailbox. Just drag any message you don’t mind relocating, such as a message from your (Mail) Trash folder.

Repeat Step 1 for each mail list you wish to recover the files from. Then close Mail.

Actually it’ll be in one or more sub-folders, but that’s the starting point.

In Finder hit Shift-Command-G and paste in the above folder reference. That’ll take you directly there. You’ll now see folders with the names of your various RSS subscriptions. Go into any one of those folders and use the search feature in Finder to look for “mail message” (without the quotation marks). Make sure Finder is only searching the folder in question and not “This Mac“.

You should now have a list of every message from that particular RSS subscription. Select one message and hit Command-A. This will select them all.

Here’s a few screenshots of what I am referring to above:

The filtered RSS messages from one RSS feed

You will now copy these messages into Mail. However, Mail won’t let you do it through the front door (using it’s Import Mailboxes feature) so we have to sneak them in through the back door.

You need to locate the folder(s) you set up in Mail in Step 1. They should be in:

If you used the @ sign in the name, you’ll see your recovery folders at the top of the list. The next screenshot shows this on the RIGHT side (like all pictures on this site, just click to enlarge):

The left side shows all your messages from one RSS feed, from Step 2. Because I used TotalFinder I am able to have a split window. If you don’t use TotalFinder or Path Finder you’ll simply have two windows open roughly side-by-side. You need to select all the messages in the RSS message folder and drag them over to the new mailbox folder you created through Mail. This step is performed completely in Finder though, not in Mail.

You’ll notice the new mailbox folder in Finder has a number of folders to drill down into before you get to the actual Messages folder. The full path will be (using my case as an example) something like ~/Library/Mail/V2/Mailboxes/@ RSS Recovery 1.mbox/47FD508F-D6E4-4F5A-AE9B-5485E81255BC/Data/5/1/3/Messages/.  That last /Messages/ folder is where you need to drag in the messages you are recovering. You’ll see this in the screenshot above.

Repeat Step 2 and 3 for each RSS feed, dragging the messages into each mailbox you created in Mail in Step 1.

Click on the new mailbox (the one into which you dragged the RSS messages in Finder). You will see that your new RSS mailboxes are empty (well, except for the one message you dragged in during Step 1). With one mailbox selected, go to Mailbox >> Rebuild. This should rebuild the Mailbox and it will not look something like this:

The now recovered messages back in Mail

Now the messages are in Mail it is much easier to export/import them into another application. It’s possible your preferred news reader app can import them. You’ll have to find out. Otherwise they can also be left in Mail. The reason we bring them into Mail first is because I find that in the case of DevonThink if I simply dragged or imported them into DevonThink it would have them in there, but they were not viewable. Bringing them in via Mail (rather than directly from Finder) was the only way I found to get around that. 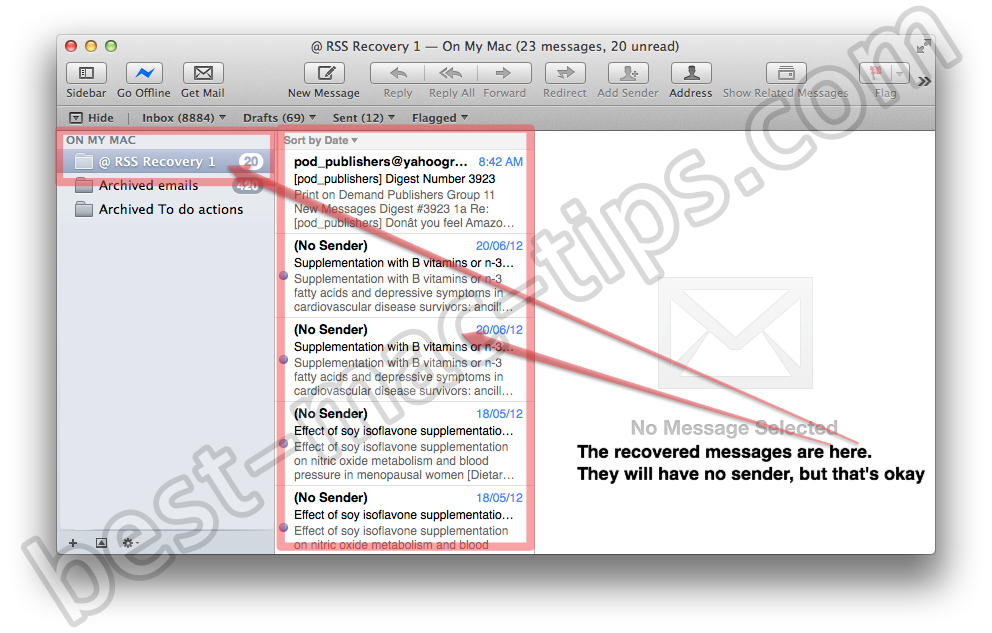