Quite often I want to synchronise an app on my iPod Touch with its related application on my Macbook. Usually the way to go about this is to connect both devices to the same Wi-Fi network. They will then identify one another and the apps will sync their data. But I don’t always have a Wi-Fi network to connect them both to. Here’s how I get around it.

Update: The way I originally went about this (still described as Method 2 below) was an unnecessary workaround. Mac computers with airport adapters already have the ability to create what are called ad-hoc networks, and it’s really simple. See Method 1.

If your Airport status icon is displayed in the main OS menubar (see Fig.1), just click that and select “Create Network” (see
Fig. 2). Give the network a name, decide if you want a password, and click OK. 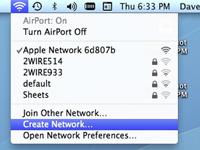 On your other computers and WiFi enabled devices you will now see a wireless network available with the name you assigned to it. Just join that network in the usual way.

In the System Preferences go to Sharing. Put a tick next to Internet Sharing. Where it says “To computers using:” make sure “Airport” is ticked. Sharing should now say “Internet Sharing: On“, with a little green light next to this text.

The airport wifi adapter on your Mac will now function as a wifi station. You should now be able to connect your iPod Touch or iPhone to the new network. The network will be named the same name as your computer. With your iDevice connected to this network you’ll now be able to sync apps across devices as though they were both connected to the same wifi network.